Note:After payment,the download link will generated on page,you can download it directly.If you can not get it,please contact us.It include instalation service,our tech team will install it for you by remote.And if it can not be installed on your pc,will refund.

Price only for One PC installation and Activation

Need Netframework 4.6 or up version installed on system.(After installation,need restart your pc)
In order to install SDP3, administrator rights are required.

Scania Diagnos & Programmer 3 Version 2.48.4
New general features
No major new general features in the issue.
New system-specific features
Chassis management system
The wizard Checking fuel level measurement for sensor from bodybuilder
now also applies to L, P, G, R, S series trucks. The wizard is used to
adapt the fuel level sensor characteristics for vehicles delivered without
Scania’s own fuel tanks and fuel level sensor or that have undergone a
conversion to install tanks or a fuel level sensor that are not from Scania.
The wizard can be found under Functions > Check > Power, fuel, air and
fluid supply > Fuel level.
System-specific changes
No major new system-specific changes in the issue.
Corrections
Engine management system
The wizard Checking the EGR circuit to verify rectified faults has been
corrected for S7 and S8 Eu5 vehicles. Some individual vehicles did not
get past the warm-up stage.

New general features
No major new general features in the issue.
New system-specific features
New user function warns of open door
The cab door open warning is a new user function for all trucks in the P, G, R and T series.
The UF1157 user function warns if any of the cab doors are open. This is because there is a potential safety risk to people inside and outside the vehicle if a cab door is open.
The new function can be found under User functions > Driver warning >UF1157 Cab door open warning.
Systems affected by the new function are ICL3, COO8 and DCS1.
New parameter for gas vehicles
A new parameter has been created for gas vehicles, Over-acceleration protection bypass.
The parameter can be found under Electrical system > Engine management system > EMO2 > adjustment.
The new parameter applies to vehicles with power take-offs and has self-regulating software.
System-specific changes
Revised text in installation test
Changes to the menu option text in the installation test have been introduced in the function wizard Installation test for industrial engines.
Systems affected are EMS/EME1. More specifically, this applies to StageV industrial engines.
The menu option Excessive nitrogen oxide levels in the exhaust gases has been renamed and is now called: Emission-related faults (MIL).
The change has been introduced to make the text more consistent with the text in the installation manual.SDP3 certificate
Handling of SDP3 certificates will change from 1 November.
In connection with this, the certificate needs to be reinstalled. For this reason, a new version (v14) of the document Certificate for services in SDP3 is available for download from Scania Technical Information Library.
The change applies to all use of services in SDP3.
Addition to information about compression tests
An addition has been made to the information about the requirements that must be satisfied in order to run the compression test on Scania
Engines engines with S8 and EME1, included in the EMS system.
The text that has been added is CAN communication between starter motor and engine control unit must be active.
Facilitated troubleshooting of the charge air pressure system
Five signals have been added to the signal list for OCS1. The signals are under Signal logging, OCS1.
The signals have been added to facilitate troubleshooting of the charge air pressure system.

Scania Diagnos & Programmer 3 Version 2.45.3
New general features
No major new general features in the issue.
New system-specific features
Engine management system
A new parameter for the Over-acceleration protection bypass has been introduced. This parameter should be inactive during normal operation,
but it can be activated. The parameter is for vehicles driven under extreme conditions.
A number of previously hidden fault code texts concerning the exhaust gas temperature sensor have been reintroduced.

Scania Diagnos & Programmer 3 Version 2.45.2
New general features
Product updates
In version 2.45.2 and later, the Product updates > Optional tab opens with the contents minimised to provide a better overview. Lower levels in the tab open with the contents expanded as previously.
New system-specific features
Tachograph
There is a new wizard for reading the extended serial number of the impulse sensor (T20). This is possible for newer versions of tachographs SC3 and SC4. If the tachograph has support for this function, the wizard will either be displayed under Electrical system/TCO/O4/TCO and the Check tab, or under Functions/Checks/Maintenance/Tachograph and Electrical system/TCO, Tachograph/O4, Tachograph/TCO/T, Sensors and monitors/T20, Impulse sensor. The wizard is called Checking the extended serial number of the impulse sensor (T20).

New general features
No major new general features in the issue.
New system-specific features
Level adjustment
There is a new check wizard for Deactivating drive on rearmost driving axle. It is intended for use during roller brake testing, for trucks with double rear driving axles. It can be found under Level adjustment in the Check tab.
Alarm system
There is a new check wizard for Micro switch check. It can be found under Alarms in the Check tab and is intended for bodybuilders of the new generation of buses, i.e. C and K series.
Exhaust gas aftertreatment management system
There is a new check wizard for Analysis of saved vehicle information at high nitrogen oxide emissions. It can be found under Powertrain > Emission control > Exhaust gas aftertreatment in the Check tab. The wizard is available for trucks and buses with engine management system S8 and EMD1 with emission class Euro 6.

2.44.1
New general features No major new general features in the issue.
New system-specific features
Driver assistance system
User function 522 Lane keep assist has been added. It is possible to read the version number of the functions to compare with e.g. the certification document.

This issue contains additional support for the next generation of buses.

All items price in autoepccatalog.com are for Installation & Guide Service Fees.All software are copyrighted by origial company. 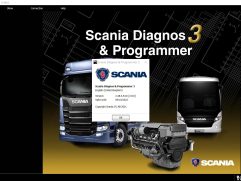